Indonesia hosted a leaders’ summit for the Association of Southeast Asian Nations (ASEAN) in Jakarta on April 24, one of the agendas was to discuss the crisis in Myanmar. Unfortunately, Myanmar’s coup leader, General Min Aung Hlaing, attended the 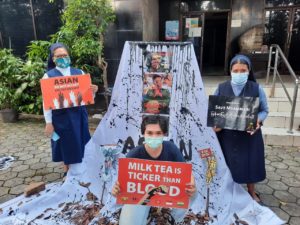 summit alongside the other nine government leaders from ASEAN member states. However, the National unity Government representing the people of Myanmar did not participate in the discussion. It caused a strong reaction from human rights activists, civil societies, and interreligious groups using the tagline “We Stand with the People of Myanmar and Go for Democracy.”

As an expression of solidarity of the Indonesian people with the people of Myanmar, human rights activists, civil societies, and interreligious groups organized an interfaith prayer which taken by the seven religions in Indonesia (Islam, Catholic, Protestant, Hindu, Buddha, Kong Hu Cu, and Sunda Wiwitan). The virtual prayer was held on April 23rd evening, using the Zoom platform, and it was live-streamed through YouTube.

Besides the prayer, on April 24, we also conveyed the press release containing the five essential points as follows:

This solidarity action concluded with a joint bike strike for Myanmar to peaceful protest Military Junta, Gen. Min Aung Hlaing in the ASEAN summit. About seventy bikers joined in the strike, coming from various civil societies and individuals concerned for democracy in Myanmar. The route of the bike strike was from the office of Indonesian Legal Aid in West Jakarta to the ASEAN secretariat in South Jakarta. However, on the way, the police guards stopped the bikers three times, and when the bikers approached the venue, there was slight tension between the police guards and the protesters; however, the action continued until it finished.